November 13, yes, It was my birthday. Number 13 has always been my lucky number since I was born. And it was the same this year.

November 13, 2018 – I decided to do something different. An uncommon birthday was filled with little things I have never done before.

I didn’t reach friends for a party. I didn’t choose a nice dress to wear on my-day (well, Tokyo is too cold for my dress mood for now).  I didn’t let myself buy costly-but-silly stuff as a self-treat as the previous years (too much for a student in Tokyo). It seemed I did things differently just because It was not affordable to do, not because I chose not to do it (lol). But yeah, It was different anyway.

This birthday, I went to a music bar in Kabukicho, named Golden Egg.

I know, Golden Egg sounds much like a food shop. And they did sell food, good food for the ears.

I found the music of Ryuichi Sakamoto there.

Golden Egg happens to be a place for nostalgic music lovers to celebrate 1970s Japanese music. To my surprise, the electro-pop music by Yellow Magic Orchestra (YMO) has their big fans here.

YMO has been famous in 1970s, when the new wave of modern music came to Japan. YMO has 4 albums and they were great hits not only in Japan, but also in the world. Ryuichi Sakamoto, one of the 3 members of YMO, was a music sensation. It is thought to believe that he has been one of the greatest music influencers in Japan.

Ryuichi Sakamoto is a musician, composer, arranger, singer, producer, and writer. At the of 66, he is still living his music life based in New York and Tokyo. In his career as a producer, Ryuichi Sakamoto has won a Grammy and two Golden Globe Awards. He composed the international hits for the movies like Merry Christmas Mr. Lawrence (1983), The Last Emperor (1987), Little Buddha (1993), The Revenant (2015)…

The music of YMO reflects a totally new image of Japan to me. A nostalgic Japan.  A friend told me YMO wanted to bring the uniqueness of Japanese music to the world, emphasizing the oriental genre on the background of computer music. Something old and something new. They have 4 albums, mixing both bright and dark tones. And for the first time I listened to Technopolis, a song inspired by the image of Tokyo in its peak years of magical development, I knew this was what I had been looking for.

I also love Tong Poo and Ballet Mécanique. Those were full of melodies that seemed strange to your ears at first, but once you got used to it, it was really hard to get back.

I got to know Jun, a musician, and a system engineer. He has been playing piano (and other musical instruments) since he was 3. He still maintains his job and his passion for music every day. Watching him and his friends performing on stage, I know artists all over the world share the same thing. We live to express our emotions through art. He told me about Ryuichi Sakamoto with his sparkling eyes. And his friends, in their 30s and 40s, were playing and singing like they were still the children of the 1970s. They were, in my eyes, beautiful. 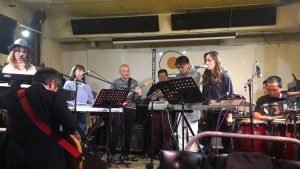 I sat there listening to the music for 3 hours with a brand new emotion. People drank beer and smoked. It was loud. Me? I drank hot Oolong tea 🙂 Jun taught me to play tambourine and he even took me to the stage. I was only able to do some awkward movements, but it was great. Everything takes time to learn, but you always need to first give it a try, right?

I waved goodbye to Jun and his friends at 10:40. It was slightly raining. I thought about my day and the things I’ve just learnt from Jun and the people I met on the way back home. It was truly the best present for this birthday.

Life is full of surprises. And little things really count!

Happy birthday to me!

This site uses Akismet to reduce spam. Learn how your comment data is processed.